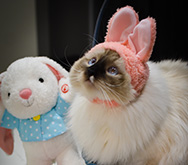 A mister mittens … of murder!

Sometimes, the wackiest pet names just come together organically. See Mr. Murder Mittens, a 2-year-old ragdoll cat who loves to chat with humans. This uniquely suited name draws in a number of influences, from his older brother Mr. Tinkles to his seal-mitted fur color. When his long name and formal title seem like a mouthful, you call always just call him his equally accurate nickname: Floof.

Mr. Murder Mittens loves paper bags—so much he cries for them at the pantry door for them—and his favorite treat is what his humans call "kitty Gogurts.” He loves to play with his little brother, a ragdoll aptly named Poofen.

When it came time to consider pet insurance for Mr. Murder Mittens, his parents didn’t have a second thought. “I want him to have the best protection in case of an emergency,” they say.