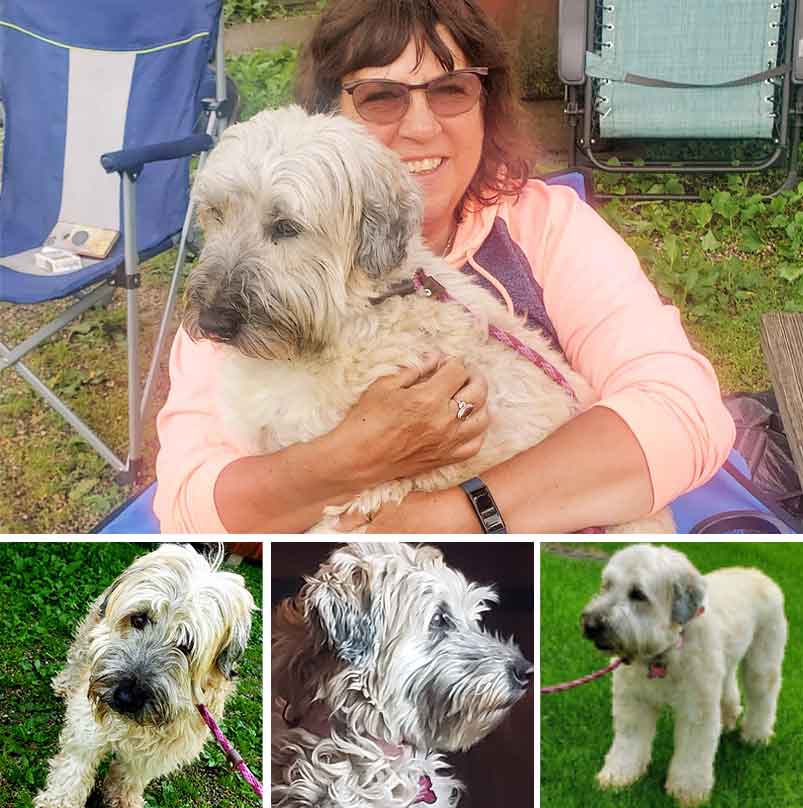 In early March 2020, we were offered the opportunity to work at home due to the news of Covid-19. A few days later, Coco's Heart Rescue posted that they were doing a run to Missouri to pick up a load of dogs that were scheduled to either be auctioned or euthanized. Sadie Mae (aka "Minnesota") was one of eight Wheaten Terriers that arrived with more than 100 other dogs.  The minute I saw her I knew I had found the dog I wanted to adopt.

She finally got an appointment for her spay about a month later. The vet called me and said they had aged her between 7-8 years old. The vet also said that she had one of the worst cases of dental disease they had ever seen and that they would be pulling a few teeth while she was under for her spay.  We (my SO and myself) just cried as we felt so bad for her and knowing that she had never been taken care of.  Then, the vet asked if we would keep her since she's not a puppy.  That broke our hearts as we know that older dogs are the last to be adopted and knowing that the vet was well aware of this and worried that Sadie would be sent back to the rescue.  We assured her that we loved her even more knowing that she had spent 8 years of her life in a cage, and was there only to produce puppies, and that we were her chance to live out her best years.

Sadie Mae has now been living here for four months.  She no longer goes in her crate (and, in fact, the crate is no longer in the house).  She has her area of the house where she feels the safest and she slowly is learning that she can explore more as she becomes more comfortable.  She now looks me in the eye when I talk to her and, although they are still sad eyes, I do see a difference in how she responds.

I am fortunate that I am still working from home so I have had this time to bond with Sadie Mae and to help her to learn to trust.  She is just the sweetest dog and it hurts to think of what her life was previously. I feel very strongly that Sadie and I were meant to be together and that I was to be her person.  I understand her need to feel safe and secure and I continue to work on building up her confidence.  Sadie Mae has been such a gift in my life and I am thrilled that she gets to be my dog for the rest of her years.  She still has a long way to go and so much to learn but she is safe and loved and that is enough.