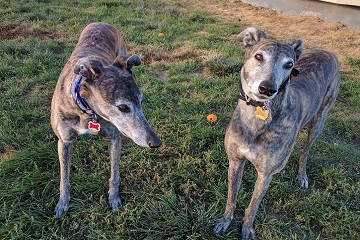 Littermates Annie and Ollie race again, but this time for a cure 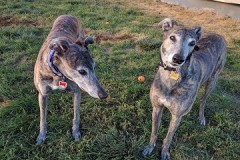 “My husband, Pat, and I had just lost our first dog together, a basenji, from lymphoma,” said Kim. “A month later, Pat was mobilized by the Army Reserve and moved away,” said Kim. “I was pretty sad and a bit lonely when I stopped by the pet store to buy cat food and came upon a group of dogs who circled around me. Not a single one barked.

I asked an employee what was going on, and I learned it was a greyhound meet and greet.”

That’s when Kim decided to learn more about this interesting breed. She started volunteering at a greyhound rescue and, soon after, fostered her first dog. “When greyhounds first come into your home, they are usually 2 to 5 years old,” Kim said.  “After retiring from racing, they have to learn everything about living in a house and all their new surroundings. They are usually overwhelmed because most have only ever lived in a crate. It can take a year to come out of their shell.”

In September 2004, Kim adopted her first greyhound, a red brindle she named Bella. Sadly, Bella died of a bone cancer called osteosarcoma in March 2013. A few months later, Kim decided to foster again, but as soon as they picked up Annie, Kim’s husband fell in love and Annie joined their family. When Kim learned that Annie’s brother, Ollie, was available for adoption, she didn’t hesitate to reunite the siblings. At first, Annie played the bossy sister. She stole Ollie’s toys and his bed. Before long, Ollie won her heart and they became best friends.

Retired, but not done racing

In June 2017, Annie was diagnosed with osteosarcoma. Having been through this diagnosis with Bella, Kim was better prepared and wanted to know more about treatment options. Her veterinarian recommended Colorado State University’s Flint Animal Cancer Center. After meeting with the cancer center team and learning more about Annie’s diagnosis, Kim enrolled Annie in a clinical trial with the hopes of helping not just Annie, but other dogs too. She believed Annie could join in the race for a cure.

Kim selected the COXEN clinical trial, which offers a personalized chemotherapy protocol based on the individual patient’s tumor characteristics. Before chemotherapy could begin, Annie would have to have her left hind leg amputated to remove the primary tumor. Annie recovered well from surgery and began chemotherapy a few weeks later. In October, routine chest X-rays revealed that the cancer had spread to Annie’s lungs, which happens in about 90 percent of osteosarcoma cases. Due to the lung tumors, Annie was withdrawn from the clinical trial.

“I had hoped the combination of amputation and chemotherapy would help Annie,” said Kim. “Unfortunately, she didn’t tolerate chemotherapy very well, and then we learned the cancer had spread to her lungs. We made the tough decision to stop chemo and keep her comfortable. She died in December 2017.”

Without hesitating, Kim scheduled an appointment for Ollie at the Flint Animal Cancer Center. After radiographs and a fine needle aspirate confirmed the osteosarcoma diagnosis, Kim faced more treatment decisions. “I wanted to try something different for Ollie, so we enrolled in the COTC026 trial,” Kim said.

“Losing Annie was extremely difficult, and I wanted to do the best I could for Ollie, to give him a chance to enjoy life to the fullest and for the longest period of time.”

The COTC026 clinical trial is investigating the effectiveness of a Listeria vaccine in delaying or preventing metastatic disease in dogs with osteosarcoma that are treated with standard chemotherapy. Following amputation in late February, Ollie began the treatment protocol.

“The first few weeks post-surgery were tough,” said Kim. “Ollie had a nerve impingement that caused a lot of pain, but about a month later, he was much better.”

After surgery, Ollie received four doses of chemotherapy followed by three vaccinations over the course of several weeks.

“We held our breath at the five-month mark, hoping to have more time with Ollie than we did with Annie” said Kim.

Eight months after his diagnosis, Ollie races around in the backyard with the two newest greyhound family members, Smiley and Lucy.

“I always knew that they really cared about Annie and have shown the same love for Ollie.”

“Kim’s dedication to Annie and Ollie’s care has been amazing,” said Hall, clinical trials nurse at the Flint Animal Cancer Center. “Despite having faced cancer multiple times with her dogs, Kim’s heart for helping us advance therapies for future patients has never wavered.”

Through her commitment to the clinical trials program, Kim turned a difficult situation into an opportunity.

“I’m a data-driven person, and I believe that knowledge is power,” said Kim. “I’ve seen so many benefits to participating in clinical trials, not just for Annie and Ollie, but for the students who are learning about cancer, for the clinicians who can use the information to improve future treatments, and for the next osteosarcoma patients. I’m happy that Annie and Ollie can make a difference. It’s been a big commitment, but it’s worth it to know that we are part of a team that is racing for a cure.”

Some call it luck; others call it fate. Whatever it is, Gimpy’s life has featured a series...