Most Common Types of Pet Cancer 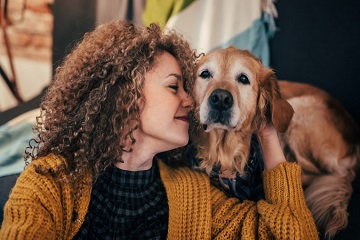 Canine lymphoma is one of the most common cancers seen in dogs today, accounting for up to 24% of all new canine cancers.  The most common form of lymphoma in dogs is involvement of one or more of the external lymph nodes.

Many dogs may not feel sick or may have only very mild signs such as tiredness or decreased appetite.  Other dogs may have more severe signs such as weight loss, vomiting, diarrhea, excessive thirst or urination, weakness, or difficulty breathing.  The severity of the signs depends upon the extent of the disease and on whether the cancer has caused changes in organ function.  Often, the only noticeable sign is an enlargement of the lymph nodes under the neck, behind the knees or in front of the shoulders.  Other organs, such as the liver, spleen and bone marrow can be involved as well.

Canine lymphoma is initially very sensitive to chemotherapy, and up to 95% of dogs treated will go into remission when the most effective treatment protocols are used.

Did you know? The most common canine lymphoma sub-type, diffuse large B cell lymphoma, mimics similar diseases in people.

Lymphoma is also a common cancer in cats. The feline leukemia virus (FeLV) has been shown to cause lymphoma in some cats.  Cats with the feline immunodeficiency virus (FIV) are also at higher risk of developing lymphoma.  Cats of any age, breed and sex can be affected.

Feline lymphoma can be divided into several different forms, which depend upon the predominant location of the tumor. Some cats have multiple sites of involvement and do not fit well into just one category. Lymphoma of the digestive tract is the most common form.  The digestive tract includes the stomach, intestines and liver as well as some of the lymph nodes surrounding the intestines.  Cats with this type of lymphoma may have vomiting, diarrhea, weight loss or a decreased appetite.

Lymphoma is initially very responsive to chemotherapy and approximately 70% of treated cats will experience remission.

Lymphoma is similar in pets and people and the disease often responds to chemotherapy and radiation therapy in the same way.

The most common primary bone tumor in dogs is osteosarcoma and accounts for 85% of all skeletal tumors. Osteosarcomas are highly aggressive tumors, characterized by painful local bone destruction and distant metastasis (spread to other organs).

Osteosarcoma commonly affects the limbs of large or giant breed dogs but can also occur in other parts of the skeleton (skull, ribs, vertebrae, pelvis).

The biological behavior, prognosis, and treatment of bone tumors depend on tumor type, location, and extent of disease.  As a result, various diagnostic tests such as X-rays, blood tests, and sometimes a biopsy are required to determine the most appropriate treatment.

Did you know? Osteosarcoma (bone cancer) in dogs and people is remarkably similar?

Mast Cell Tumors (MCT) are the most common skin tumors in dogs. MCT can look and feel like anything, so it is impossible to diagnose without looking at cells under the microscope. After close examination, a grade of malignancy is assigned. The grade suggests how the tumor will behave and the best course of treatment. Low or intermediate-grade tumors are unlikely to spread, and surgery may be the only treatment required. High-grade tumors have a greater chance of spreading, so veterinary oncologists look very carefully for spread and consider using chemotherapy in addition to surgery. Radiation therapy is another option for some cases.

Diagnosis of melanoma will usually require a fine needle aspirate or biopsy.

Surgery is the first line of defense for melanomas.  Dogs that receive an aggressive surgery first (to minimize the likelihood of leaving microscopic tumor cells behind) may do better than those receiving conservative surgery. Tumor recurrence or spread (metastasis) is likely.

In cases where surgery is not possible, radiation therapy, chemotherapy or immunotherapy can sometimes be effective.

Squamous cell carcinoma (SCC), which arises from the cells lining the oral cavity, is the most common oral tumor in cats.

Many cats with oral SCC will display signs such as drooling, foul odor, bleeding from the mouth, or difficulty eating.  Some cats may present with signs suggesting a dental problem, and SCC is diagnosed as an underlying cause of the dental disease.  A diagnosis of SCC usually requires a biopsy.

Whenever possible, surgery is the first line of defense for SCC.  Unfortunately, due to the very small size of a cat’s mouth and the relatively large size of the tumor when it is usually diagnosed, curative surgery is possible in less than 10% of cases.  When surgery can be performed, very aggressive surgery, often removing parts of the upper or lower jaw, is recommended because of this tumor’s ability to deeply invade bone and other deep structures in the mouth.

Radiation and chemotherapy provide additional treatment options. Unfortunately, very few cats with SCC are cured. The goal with treatment is to maintain an excellent quality of life for as long as possible.

Hemangiosarcomas (HSA) are malignant tumors derived from the cells lining blood.  Since blood vessels occur throughout the body, HSA can appear anywhere.

The most common sites are the spleen, liver, and heart. It happens less commonly in the skin.

Most HSA are both locally aggressive and have a high likelihood of spreading to other parts of the body. These tumors are typically filled with blood and very fragile. Dogs with HSA occurring inside the body may have signs related to blood loss into the abdomen or the space around the heart, resulting in weakness, lethargy, pale gums, etc.

Dogs with cutaneous HSA may simply have a mass in or under the skin.  Some of these cutaneous tumors may occur in light-skinned dogs as a result of sun exposure.

Interestingly, this is a very rare disease in people.

A complete diagnostic work-up, including blood work, imaging, and biopsies, is recommended before pursuing treatment which can include surgery, radiation and/or chemotherapy.

Bladder cancer in pets and people is very similar. Studies in pet dogs have resulted in clinical trials for people with the same disease.

Some call it luck; others call it fate. Whatever it is, Gimpy’s life has featured a series...