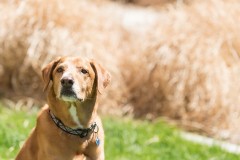 In 2010, a woman brought her dog into a local veterinarian to help deliver a litter.  After delivery, it was immediately apparent that something was wrong with the hind legs of one of the puppies. When the owner learned of the puppy’s condition, she believed euthanasia would be the best option. Fatefully, Kelly, a veterinary technician at the clinic, stepped in and said she would take the pup if the owner would keep him with his mother until he was 8 weeks old. She agreed.

When the puppy eventually joined Kelly’s home, he wasn’t able to use his hind limbs. To honor his not-quite- right legs, Kelly named him Gimpy.

“I wasn’t sure if he would ever be able to walk,” said Kelly.

But as luck would have it, Gimpy was soon chasing his new fur siblings around the house.

“It was pretty incredible to see Gimpy running around,” said Kelly. “I really didn’t think it would be possible without surgery or some type of intervention.”

Gimpy settled into life with Kelly and his four-legged siblings, which included a dog and two cats.

“He’s a super-sweet dog,” said Kelly. “Not the smartest, bless his heart, but his main goals in life are to cuddle and please.”

April 2018 marked another significant time in Gimpy’s life. After he swallowed a rock that would not pass, Kelly brought Gimpy in for X-rays to examine the blockage. That’s when his veterinarian discovered a small splenic mass. The good news; it was caught early and wasn’t yet causing any internal bleeding. Gimpy had surgery the next day. The bad news came when they learned that Gimpy had a type of cancer called splenic hemangiosarcoma. With her veterinary experience, Kelly knew the prognosis was poor, so she set out to find treatment options.

As luck would have it, Kelly found a clinical trial for patients with splenic hemangiosarcoma nearby at Colorado State University’s Flint Animal Cancer Center.

After their first visit to the Flint Animal Cancer Center, Kelly learned Gimpy would be eligible to participate in the study.

“I have to admit, I was a little nervous. I was trying to manage my expectations and not be too hopeful; I know this is an aggressive cancer,” said Kelly. “I was second-guessing my decision to pursue further treatment when my son, Daniel, convinced me it was the best thing to do. He said, ‘wouldn’t it be so great if Gimpy could be part of something that helped other animals?’”

Encouraged by Daniel’s words, Kelly enrolled Gimpy in the VDC-597 for Treatment of Canine Splenic Hemangiosarcoma trial. VDC-597 is an oral medication that has antitumor and antimetastatic activities in human and mouse cancer models. The goal of the study is to evaluate the effectiveness of VDC-597 in canine patients.

Following the study protocol, Gimpy receives regular doses of VDC-597 at home and visits the cancer center for frequent checkups.

“Gimpy loves going to CSU, probably because the clinical trials staff are always excited to see him,” said Kelly.

A year after diagnosis, Gimpy lives life just like before with daily walks, regular hikes, and frequent peanut butter treats.

“Given the typical prognosis with this disease, I wasn’t expecting to celebrate Gimpy’s 9th birthday, but here he is,” said Kelly.

It’s safe to say; Gimpy is one lucky dog. 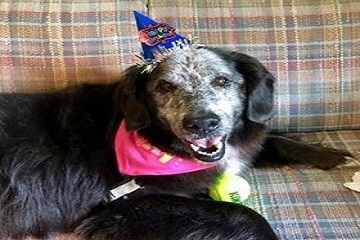 After a scary diagnosis Sweetie has since made a full recovery thanks to the help of Flint...