What Pet Owners Should Know 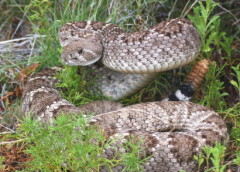 Depending on where you live or what outdoor activities you like to do with your dog, he may be in danger of being bitten by a poisonous snake. Rather than run the risk of having your beloved pooch severely hurt or worse, dog owners should consider having their four-legged friend inoculated with the rattlesnake vaccine.

The rattlesnake vaccine was first licensed for use in animals in California in July 2003 and was approved nationwide by the USDA in October 2004.

According to Red Rock Biologics, the organization that developed the rattlesnake vaccine, in Sacramento, Calif., approximately 300,000 dogs and cats are bitten annually in the United States by venomous snakes. Additionally, dogs are 500 times more likely to be bitten by a poisonous snake than to get rabies.

Venomous snake bites have the potential to kill dogs, and are known to cause serious muscle, liver and neurological damage.

With such alarming potential consequences for our fuzzy friends, dog owners should consider adding the rattlesnake booster to the list of their pets’ routine vaccinations.

How the Rattlesnake Vaccine Works

The rattlesnake vaccine works by stimulating the dog’s immune system to produce antibodies against snake venom, and it helps lessen the reaction a dog may have to a snakebite.

The vaccine is recommended for dogs living in “high-risk” geographical areas where rattlesnakes are prevalent, as well as for dogs that accompany their owners on hikes, camping trips, hunting excursions, or are in any way at risk of coming in contact with a rattlesnake.

According to Dr. Paula Ibsen, a staff veterinarian with Red Rock Biologics, dogs need to be inoculated at least 30 days before any potential exposure to rattlesnakes (full antibody protection is not reached until 30 days following the vaccination), and should get a booster shot every six months thereafter.

According to Ibsen, there are three benefits to the rattlesnake vaccine. “Besides buying you more time to get your dog to the veterinarian if he was bitten, dogs will experience a lot less pain, tissue-sluffing and swelling,” she says. “Even if there is swelling at the bite site, vaccinated dogs will normally see swelling subside within 20 minutes.”

There are additional benefits of the vaccine: Cross protection is provided to multiple species of rattlesnakes, as well as Copperheads and the venom of the Western Diamondback, the Western rattler (North & South Pacific rattler, Prairie rattler, Great Basin rattler), Pygmy rattlers, Massasaugas, Sidewinders and Timber rattlers.

In early 2012, Red Rock Biologics began working on creating a different formulation that will protect against the venom of Eastern Diamondback and other similar species.

Pet owners should be aware that not all vaccines are 100% effective. Even if a vaccinated dog is bitten, the situation should be treated as an emergency and the owner should take the dog to a veterinarian for care as soon as possible. Most vaccinated dogs still need a dose of antivenin after being bit.

Although people may think the price of the vaccine might be costly, the cost of treatment for snakebites can be even more so. However, the cost to vaccinate your dog now will save you money in the long run should your dog be bitten and not vaccinated.

If you live in areas with a rattlesnake population, especially in southern California and the southwest region of the United States, you should discuss your pet's immunization plan with your veterinarian to decide if the rattlesnake vaccine is right for your pet.