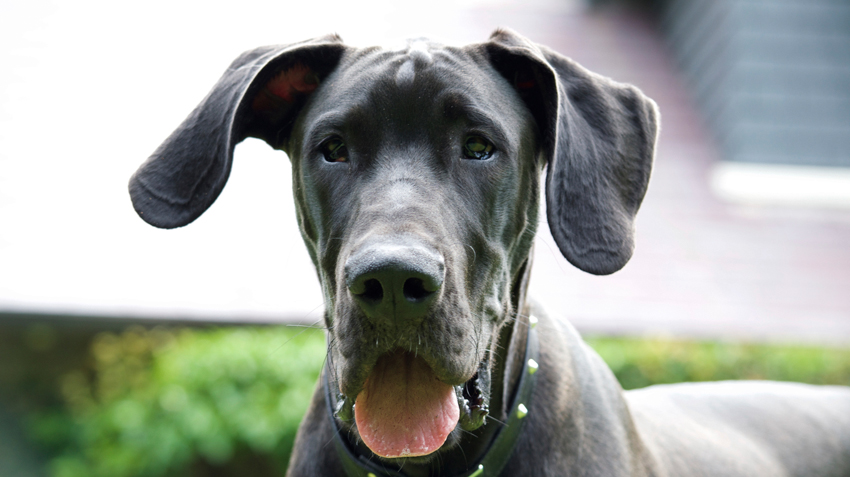 Despite their large size, most Great Danes think they’re lap dogs and seek TLC with their people. Known for “leaning” on people as they stand, these 100 to 200 pound pups are oblivious to their magnitude.

Sweet, affectionate and playful, Great Danes are currently registered as the 15th most popular dog breed in the U.S.

Here are five things you may not have known about Great Danes.

Could those ancient Egyptian drawings be those of Great Danes?  Are those detailed descriptions in Chinese literature dating back nearly 1000 years about Great Danes? Or is the old German lore about crossbreeding a mastiff and an Irish wolfhound 400 years ago the true origin of the Great Dane?

Historians have mixed theories on the origins of the Great Dane, but one thing is known for certain: this large breed dog — once named the Large Danish Hunting Hound (albeit from Germany, not Denmark) —began making its presence known during the late 1700s. By the early 1900s, the breed, then known as the Grand Danois (“Big Danish”)— it had at least six different takes on its names over the years — was translated from French to English as the “Great Dane.” 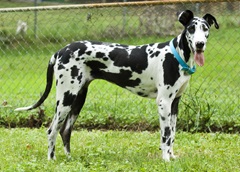 Despite its intimidating size, the Great Dane is extraordinarily gentle and gets along well with children. They’re even known to befriend cats.

In addition, this large, dominant dog likes small squeaky toys and can easily adapt to smaller living spaces such as apartments.

The Great Dane is one of the few breeds with such a wide variety of coat colors.

While nine colors are officially recognized by dog show clubs, a Great Dane can be one of the nine or a mixture of the nine: Fawn (golden yellow with black facial markings), brindle (black and fawn in a chevron pattern), blue (deep steely gray), black, black and white, white, harlequin (black spots against white), merle (mottled or kaleidoscope-like patches of color), and mantle (predominantly black with white muzzle, neck, chest, paws and tip of tail).

4. My What Big Ears and Tail You Have!

Many people are accustomed to seeing the Great Dane with cropped, pointed ears and possibly a docked tail. Historically, it used to be standard practice to crop a Great Dane's ears but this has become less popular in recent times. Would it surprise you to know that Great Danes are actually born with floppy ears and a super long tail?

Not only is the Great Dane tail long, it is also powerful. The breed is known for its “happy tail,” when the tail is wagged very hard, smacking whatever is in its way, which can lead to tail trauma. This can become a chronic issue which can lead to docking the dog's tail; consider preventive, protective methods for your Great Dane’s tail before agreeing to amputation.

It is becoming more common to see Great Danes with their natural floppy ears and tail. 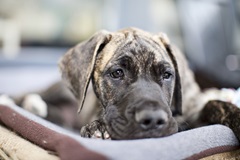 Based on Nationwide pet insurance policyholder claims in 2015, the most common health conditions for Great Danes are, in order of pervasiveness:

If you would like to read more about important Great Dane health issues, including stomach bloat, hypertrophic osteodystrophy and cardiomyopathy, read our full-length article on Great Danes.