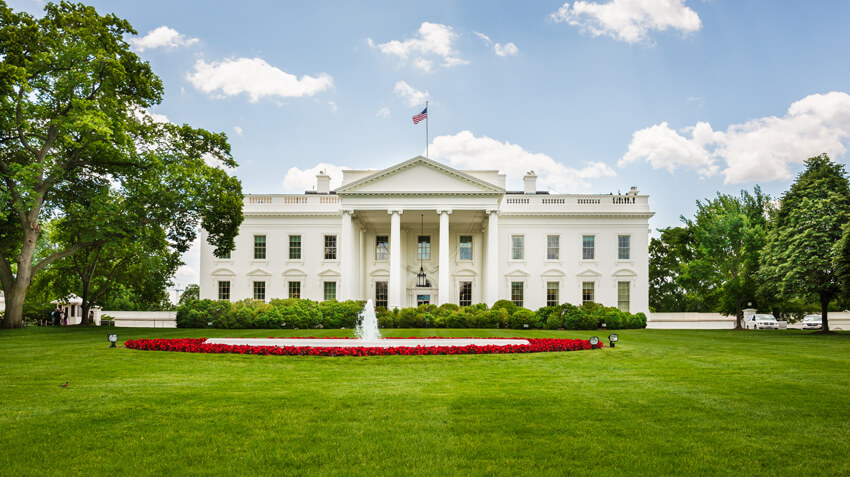 President Obama and the first family welcomed Bo, the presidential pooch, to the White House in 2009; Sunny soon followed in 2012.

The Portuguese water dogs joined an exclusive canine club of White House inhabitants that has entertained the nation throughout the years.

Located just miles from the White House is America’s very own Presidential Pet Museum. Established independently in 1999, the museum preserves and displays items, information and artifacts regarding our nation’s “first pets.”

Goats, Pigs and Rabbits, Oh My 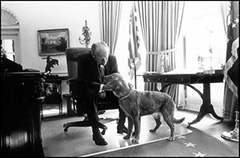 Did you know Washington kept more than 30 hounds and a dozen horses on hand to satisfy his passion for fox hunting? During Lincoln’s administration, the White House was home to— along with the usual cats and dogs—goats, ponies, rabbits and even pigs.

The annual “pardoning” of the turkey actually got its start from young Tad Lincoln’s pleas to spare a fowl destined to become Christmas dinner. After Lincoln released the bird, the last–minute reprieve became a White House Thanksgiving tradition. 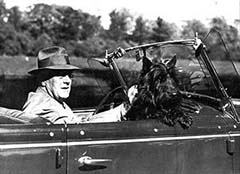 Calvin Coolidge’s fondness for dogs turned the White House into a virtual kennel that included a Shetland sheepdog, chow chows and collies, cats, canaries, a goose, a donkey, a bobcat and raccoons.

Teddy Roosevelt, an animal collector and avid ornithologist, had an incredible menagerie including horses, dogs and cats, a flying squirrel, a horned toad, ducks, kangaroo rats, a badger and a macaw. Teddy even established a cemetery for his pets at his home in Sagamore Hill on Long Island, New York. 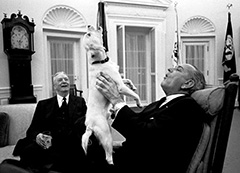 Although dogs have remained the primary pet of choice for presidents, horses have had a prominent presence. Jefferson called Washington “the greatest equestrian of his age.” Ulysses S. Grant was considered a “horse whisperer” due to his ability to tame horses. Other horse lovers include Andrew Jackson, John Tyler, James Polk, Zachary Taylor, Teddy Roosevelt, Ronald Reagan and George W. Bush.

During President Kennedy’s administration, a yard was constructed near the West Wing and stocked with child-friendly animals that included lambs, ponies, a horse, dogs, guinea pigs, parakeets, a canary, a cat, hamsters and a rabbit. Its most famous resident was Pushinka, the pup of a Soviet space dog that was given to young Caroline Kennedy as a gift from then-Russian premier Nikita Kruschchev. 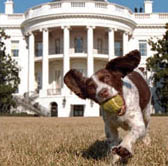 Perhaps one of the most well-known presidential pups, Millie was the favorite of George H. W. Bush and his family.

The springer spaniel and her puppy, Ranger, became the subject of a book which has sold more copies than the autobiography of George Bush himself.

The museum has over 1,500 items of interest for pet fans. Among them, a portrait of President and Mrs. Reagan’s dog, Lucky, plus photos and exhibits depicting George Washington’s horse, Nelson; Clinton’s dog and cat, Buddy and Socks; and the current White House pets, Miss Beazley and Barney.