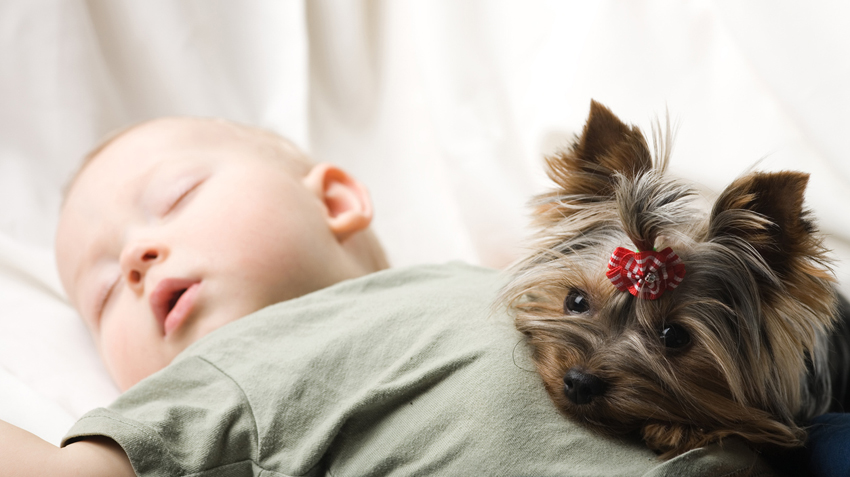 Good news for pet lovers who are also parents to newborn babies: A study published by Pediatrics Journal suggests that infants exposed to dogs and cats during their first year of life may develop a stronger immune system, offering protection against respiratory tract infections.

The study, “Respiratory Tract Illnesses During the First Year of Life: Effect of Dog and Cat Contacts” was conducted in Finland from September 2002 through May 2005 and published in July 2012. Finnish pediatricians at the Kuopio University Hospital monitored 397 infants during their first year of life, presenting parents with a weekly questionnaire in which they were asked whether they had a dog or cat at home and how much time their pet spent outside daily.

Parents also kept a weekly diary of their children’s health, documenting ailments such as fever, runny nose, cough, ear infection, diarrhea, urinary tract infection and rashes. These results were then analyzed to rule out factors such as the presence of other siblings, low birth weight, daycare attendance, breastfeeding, and whether anyone in the home smoked cigarettes.

Infants Living with Pets May Be Healthier

Although infants living with cats also displayed better health, the results were stronger when it came to their canine companions.

“The children having dogs at home were healthier, had less ear infections and needed less antibiotics,” says Elija Bergroth, a Finnish pediatrician and lead author on the study.

Infants with dogs who spent time outside had fewer fevers and used the least amount of antibiotics as compared to infants without dogs.

“We offer preliminary evidence that dog ownership may be protective against respiratory infections during the first year of life,” says Bergroth.

In theory, when Fido and Fluffy spend more time outdoors, they track in more dirt — and bacteria — when they come indoors. An infant’s exposure to that dirt and bacteria increases the child’s immune system.

Pets May Also Protect Against Allergens 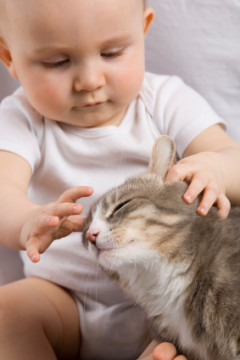 Similarly, in 2002, the National Institute of Allergy and Infectious Diseases (NIAID) and the National Institute of Environmental Health Sciences (NIEHS) released results of a study that followed 474 children from birth to age six or seven, during which the level of dust mite allergen in their rooms was measured and their blood was tested for antibodies to common allergens.

Parents balancing newborns and critters alike can embrace a full house with potential benefits: Not only could your dog become your baby’s best friend, those frisky felines have a lot to purr about, too.