Why Dogs Howl at Sirens 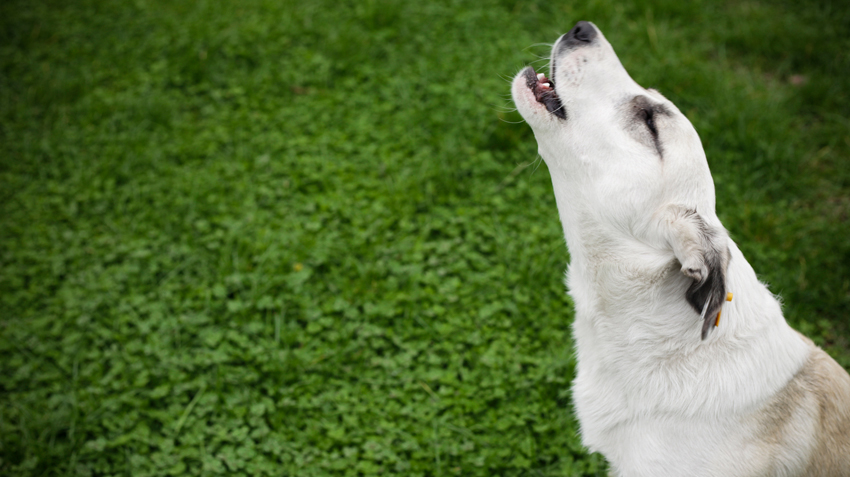 Ancient Form of Communication May be the Answer

A few years ago, while running errands, I pulled off to the side of the road to let a convoy of fire engines pass by. As the sound of sirens began to approach, I heard a low, mournful howl radiating from my backseat.

It was Sable, my black Labrador retriever; her head was thrown back with her chin raised straight up, eyes closed as she joined the chorus of sirens.

It was the first time I’d heard her respond to the sound of a siren. My other dog, sitting next to Sable, pretended not to notice this odd behavior or the exponentially loud alarms of the engines speeding by, choosing instead to nudge me with her nose as if to tell me to keep on driving.

I was fascinated: Why do dogs howl at sirens? And why will one dog howl while the other won’t?

The sound of howling dogs may remind us of wolves in the wild, calling to one another. 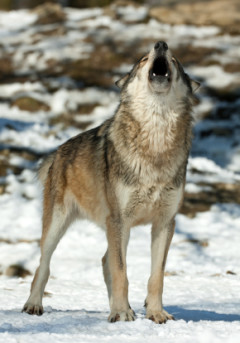 In fact, this is the more popular explanation for why dogs howl at sirens. Wolves use howling as a method of communication and as a sort of primitive form of GPS to locate one another.

Dogs, as descendants of wolves, may be expressing this instinctual behavior when prompted by the sound of a siren.

As social pack animals, dogs may be interpreting a siren—or other high pitched sounds such as a flute, clarinet or a particular TV theme song—as communication.

Animal behaviorists and researchers point out that howling can be heard by the keen ears of wolves—and dogs—from long distances, hence making it the preferred choice of communication.

Chalk it up to pack mentality: Some dog owners may have noticed their dog howling in response to a neighbor’s dog. This behavior can be compared to the basic “contagious” response most dogs have when they hear another dog barking: they begin to bark themselves, especially if they sense fear, danger or a threat.

Just as with people, a dog’s hearing ability depends on its age as well as its breed. Dogs hear a higher frequency of sounds than a person, which is why ultrasonic signals such as those used in training whistles can be heard by dogs.

This has led some to wonder if the sound of sirens actually hurts a dog’s ears. When we hear a loud sound, we tend to cover our ears with our hands to block out the noise. Are dogs howling in response to ear-splitting noise?

Veterinarians do not believe this is always the case. According to Dr. Laura Hungerford, a veterinarian and research scientist, and faculty member at the University of Nebraska, a dog isn’t always howling at a sound because it hurts his ears.

“He may associate the sound with particular events or have learned that if he howls, the noise is ‘chased’ away.”

Hungerford explains that pain results from sounds that are much louder than the threshold of hearing. “Dogs could feel pain from sounds that weren’t painfully loud to us. Very loud sounds can hurt the ears and if a sound seems too loud to you, it is probably more so to your dog.”

Veterinary behaviorists point out that most dogs do not run and hide, tuck their tails or react in such as way that would indicate they’re feeling pain due to the sound of sirens.

If my dog Sable is any indicator, this makes sense. Instead of moving away from the sound of sirens, she now chooses to go outside when she hears them and howl along to the chorus.

Why Don’t All Dogs React to Sirens? 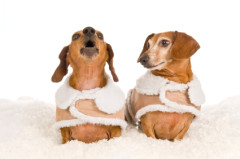 While research hasn’t been conducted to determine the exact percentage of dogs who howl at sirens versus those that haven’t, it doesn’t take a scientist to figure out that dogs, like people, are simply different from one another.

Perhaps some dogs feel an intuitive need to connect with the source of the sirens, believing that it is actually a pack of dogs communicating from a far. Other dogs might feel confident and secure where they are, and opt to ignore the sound.

In the case of my two dogs, it’s interesting that our howling Sable is the submissive “beta” pooch, while our other dog closely guards her position as the “alpha” leader in our family pack. Could she be delegating communication duties to Sable? Or is she simply not interested in what other “packs” may be out there?

Whatever the case, when I now hear Sable howling along to the tune of sirens, I’m reminded of passages from Jack London’s The Call of the Wild and envision my domestic pup running off to join the wolf pack, answering the ancient call of wolves.