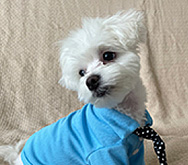 Many aspiring pet owners will brainstorm pet names until they come up with a winner. That’s how it started for the Christine TenEyck and her pooch, Shoogieboogie.

“In the months leading up to getting a dog, we were trying to think up a name,” she remembers. “‘Sugarbooger’ came up as a joke, and over time that evolved into ‘Shoogieboogie.’ We kept calling our hypothetical dog that, so by the time he came home it already stuck with us.”

As luck would have it, Shoogieboogie had a personality as unique as his name. Chris says, “He's either bouncing off the walls or sitting quietly and looking like he's contemplating the meaning of life—with no real in between. He loves being close with people and climbing over them into their laps.”

Chris decided to get pet insurance for Shoogieboogie early on, in part due to her experiences caring for an older pet in the past. “While my family was able to pay for treatment out of pocket, I think any form of help or backup would have helped ease our minds…. It's fairly inevitable that our pets are going to have some not-so-great days, so it helps to be prepared.”