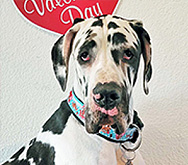 A big pooch with a truly unique name

Of course, a shorter name comes in handy, too: “We call her Princess Wiggle Butt, because she wags her tail so hard that it's constantly in motion.”

Redwood Stinging Tenticles is a big lovable pup, but she lives up to the “RuhRoh” part of her name as well. “She'll power her way through her day like a tank. She opens gates and crates and doors, positive she should be wherever her humans or furblings are.” When it came time to consider pet insurance for Redwoods Stinging Tenticles of the Sea RuhRoh a.k.a. Princess Wiggle Butt, her humans didn’t think twice. They chose Nationwide “to make pet parenting a little less stressful.” Sometimes, simplicity is where it’s at.