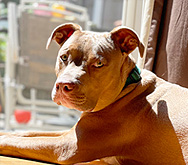 A wacky name coming from the top rope

Oooo yeah! As wacky pet names go, this one is the cream of the crop. Macho Dog Randy Savage, a loveable pit bull named for the iconic 90’s wrestler, is a bundle of energy who loves playing with other dogs. “My husband chose the name because normal names are boring,” says dog mom and ringside manager Erica Stearns. “Macho Dog Randy Savage sums up most pit bulls, and the name fits him perfectly.”

Macho Dog Randy Savage has two-legged sisters, who he protects and loves dearly. “He is a mama’s boy and enjoys cuddles on the couch with his people,” Erica adds.

Randy’s people are protective of him, too—which is why they opted to buy pet insurance. “We decided to purchase pet insurance from Nationwide because it was reasonably priced and had the option for wellness coverage. We like that Macho Dog Randy Savage has insurance to help support his overall health.”