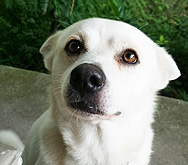 Things that go boop in the night

Ghostopher P Spookington isn’t a name that you come across every day. Like a phantom, it came to dog mom Ciara Setters seemingly out of thin air.

“When I adopted him, his name was already Ghost. He has a really goofy demeanor, so I wanted to give him something that sounded as ridiculous as he acts, something that embodies the personality he has.”

She continues, “Because his name is Ghost, I refer to him as my ‘spooky boy.’ Ghostopher felt like the right thing to say that ghost was short for, and I wanted to give his full name more flare, so I added the middle initial and last name.” The name fits him to a tee, as a pooch who is more delightful than frightful. “Ghost has a thing that he does when he doesn't want to do something you want him to, he will slam himself down on the ground and rub his paws over his ears and eyes like he is throwing a tantrum, then he will peek at you to see if you will make him do it again.”

When it comes to pet insurance, there never was any question for Ciara. “My animals are my children; they deserve the best care. Nationwide's team has been amazing thus far and they truly do care.”