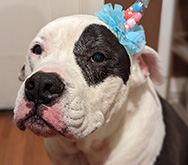 Doggy dad Eugene De Guzman landed on an especially smooth combination of references when he named his spunky English bulldog/pitbull mix. “I wanted to give him a strong name with a quirky twist … I started with Bruno, that led to Bruno Mars, a singer who I greatly admire. [Then] Marscapone was a play on mascarpone, an ingredient used in Italian desserts.” And thus, Bruno Marscapone was crowned.

Since then, Bruno has been making people smile with his wacky name and his “rhino in a dishware shop” approach to life. “I have to have a solid stance when I'm around him. Otherwise, he will knock me over. He thinks he's a lap dog. He does not realize how big or strong he is.”

As strong as Bruno is, Eugene knew he had to protect him with the best coverage he could find. “A friend recommended Nationwide and shared her experience. I was looking for a program that will help me with Bruno in the event something goes wrong.”