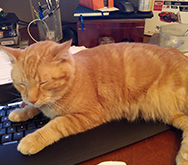 Shake it off with Tayroar Swift

Inspired by the pop music queen, Tayroar Swift has a personality as big and bold as her namesake. “She goes by Tay-Tay,” according to cat dad Mike Kaiser. “It’s a long story.”

An affectionate kitty, Tayroar always puts her fans first. Recently, she has been doing double duty, keeping Mike’s neighbors company—and getting twice the attention in the process. “Tay gets major spoiling between both families and works it as much as she can.”

Mike wanted to give Tay-Tay world class protection from the unexpected. That’s why he chose Nationwide pet insurance. “[It’s a] good value and a reputable name,” he says. “Plus, good service, especially with the online portal.”