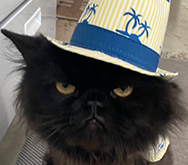 Rumor has it that there are twenty-three individual flavors that get combined to make Dr Pepper. For this great pet name, Verna Lewis and her daughter only needed three.

“My daughter named him with her last name—Salting—in mind, and ‘Pepper’ because he is an all-black cat,” she remembers. “But she also loved Dr Pepper and couldn't quite decide on which name she wanted. I suggested she merge both, hence: Salt 'N' Dr Pepper.”

Turns out, Pepper is a one-of-a-kind personality, like his name would suggest. “He's a little scaredy cat and everyone says he looks like Grumpy Cat. But he's super smart and very talkative when he's comfortable with you. He loves face rubs and treats! He's also toilet trained, and camera shy about it.”

When it came time to protect Salt 'N' Dr Pepper from the unexpected, Verna went with Nationwide, a decision she made thanks in part to her voluntary benefits package at work.