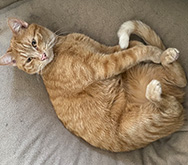 Call him Pickles for short

Many great wacky pet names don’t come from a single moment of inspiration—they build and develop over time. Take for example Pickles McButterpants the Muffin Slayer. “I had seen an ad for a cat named Pickles and I thought it was an awesome name,” recalls his mom, Kelli Hoover. “So, when I got a new kitten, I knew he would be Pickles, but it didn’t sound just right for him, so we added McButterpants to it.

“Then as we were eating muffins, he went crazy over them and wouldn’t leave us alone. That is how he got the title of the Muffin Slayer.”

According to his mom, Pickles can be a bit of a brat to his cat sisters. “But he’s a sweet guy, whose best friend is a dog who is unsure she’s a dog.” When asked how to come up with a wild and wacky name like Pickles McButterpants the Muffin Slayer, she adds, “You have to find one that fits. You can’t force a name on a pet, but when you say the name and it’s the right one, it will just sound right.”

Kelli chose Nationwide pet insurance for her beloved Pickles to make sure she was always in control of his care. “I want to make sure I never have to make a decision about my pets’ health based on financial reasons,” she says.