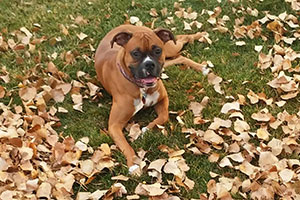 When Sara Kalista of Fairfield, Montana lost her 3-year-old Boxer, The Dudeness, to an aggressive type of cancer, she was devastated. After a period of grievance, Sara decided to bring a new Boxer puppy into the family, and wanted to honor The Dudeness' legacy by dedicating the puppy's moniker to his memory. The family threw around a few ideas until they agreed upon the name: The Other Dude.

"Losing The Dudeness was really hard on us," said Sara. "We considered the new puppy his brother and felt like his name should reflect that. People always get a little chuckle out of his name, but when we explain the reason behind it, they really enjoy it."

The Other Dude, nicknamed O.D. for short, has now grown into an easy-going dog that loves his life on the farm. He enjoys exploring the open fields and playing with Peanut, the family cow.

Sara signed The Other Dude up for pet insurance from Nationwide to help remain financially protected against any medical issues he may face in the future.

"We had Nationwide during The Dudeness' fight with cancer and it helped tremendously," said Sara. "We enrolled O.D. as soon as we brought him home."