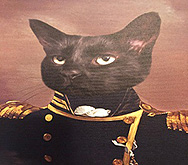 A local rescue, Admiral Turbo Meowington is in a galaxy of her own with this one-of-a-kind moniker.

“When we rescued her, she came with the name Turbo,” says her owner, Nikolous. “We have a Starship Enterprise rug that she loves to lay on, and for Christmas we got her a Borg Cube rug. Since she was in charge of two ships, we named her Admiral… and Meowington, well, that was just cute.”

Beyond manning the fleet, Admiral Turbo Meowington is also the leader in belly rubs.

“She’s about the most lovey cat you have ever met. She will flop down in front of you and present her belly—and will not let you walk by without giving her belly rubs,” Nikolous went on to say.

We aren’t the only fans of the name. Nikolous says that most people laugh or giggle when they hear her name.

When it comes to naming your pet, Nikolous suggests just watching your pet: “They tend to name themselves, they will earn it.”

As a responsible pet parent, Nikolous understands the importance of pet insurance for his cats. “I got pet insurance for both cats because vet bills are expensive. I want to be able to take them in when I need it.”